On the Farm with Farmer Randy Massey

We have covered a lot of ground in the Southeast, talking with growers about life and farming. We have hours of interviews that we are eager to share with you, giving you insight into the lives of the men and women whose livelihoods are not only at the mercy of Mother Nature, but also at the mercy of our understanding of how our purchasing decisions deeply impact the food system.

By connecting with farmers in their hometowns, we also gain a unique perspective of rural life that we otherwise wouldn’t have privy to from our bustling urban landscapes. With the relationships we foster and the knowledge we gain, we are able to build more sustainable bridges within our food systems and, ultimately, our communities.

Back in October 2021, we visited one of Happy Dirt’s farmer owners in Elon, North Carolina, Randy Massey. The land on which Randy farms was first owned by his great grandfather. Randy’s grandfather and father were farmers, making him a third-generation farmer. When it comes to organic farming, Randy understands that organic-farming practices are vital to maintaining healthy soil and building a more sustainable food system. He began his organic-farming journey in 2008 with 23 acres of organic produce and has since grown his organic operation to over 200 acres.

While standing in one of Randy’s cabbage fields, we learned more about his life growing up on the farm, the ups and downs of farming, why the organic produce we buy at the grocery store has a higher price tag, and what he likes about working with Happy Dirt. Randy’s words are peppered with humor and wisdom that we hope will inspire young farmers and consumers alike! Happy Dirt: How did you get started farming?

Randy: Everybody back before me always done it. I grew up and helped them, and it was just something I liked to do. This place is my granddaddy’s place.

Happy Dirt: What’s one of your favorite childhood memories on the farm?

Randy: That tree right there, I never pushed it up because granddaddy and them wouldn’t let me. But then I was remembering as I was pushing another tree up the other day that when I was a little boy, they would bring me to the field and put me under the tree right there. And I could get out and I could play because there was a little bit of sandy soil around the tree. And I’d call it a sand castle but it was like a damn volcano but I’d call it a sand castle. You know, and I’m a dumb ass and I ain’t got no kids, but I often wonder if we wouldn’t be a whole hell of a lot better off in this day and time if everybody had something to do like that. It’s like kids don’t have a childhood anymore. I don’t know.

Happy Dirt: How would you describe the farming profession?

Randy: It’s a challenge, which it is. It’s just like all the people that you meet and all; it’s just something unique that a lot of people never get to experience. Happy Dirt: How has farming changed as you’ve started?

Happy Dirt: You picked an occupation that you can really learn from.

Randy: You never quit learnin’. If you don’t learn something new everyday, you ain’t done nothing! I mean it will be itty bitty sh*t. There’s always room for growth, I don’t care how good you’re doing. Like what have I learned this morning? Makesure to pay more attention to the dates on every thang.

Happy Dirt: In the context of farming, is there anything recently that you’ve started to use or a practice that works better?

Randy: Using the microbes has helped us a lot. As far as disease control and the overall health of the plant and the soil, it’s better. You got the microbes outthere and your plants are strong. If you have a strong plant, you have less problem with disease. You gotta be proactive. But if the weather goes south, you can put everything but the kitchen sink on it and it isn’t going to help a f*&kin’ thing, ’cause it’s Mother Nature.

It also takes a lot of work to keep the mildew off the crops when we have a wet season. We use copper and microbes and peroxide. That’s about all ya got in your toolbox really. Peroxide pretty much kills everything when it hits it like it does when you poor it on a cut. 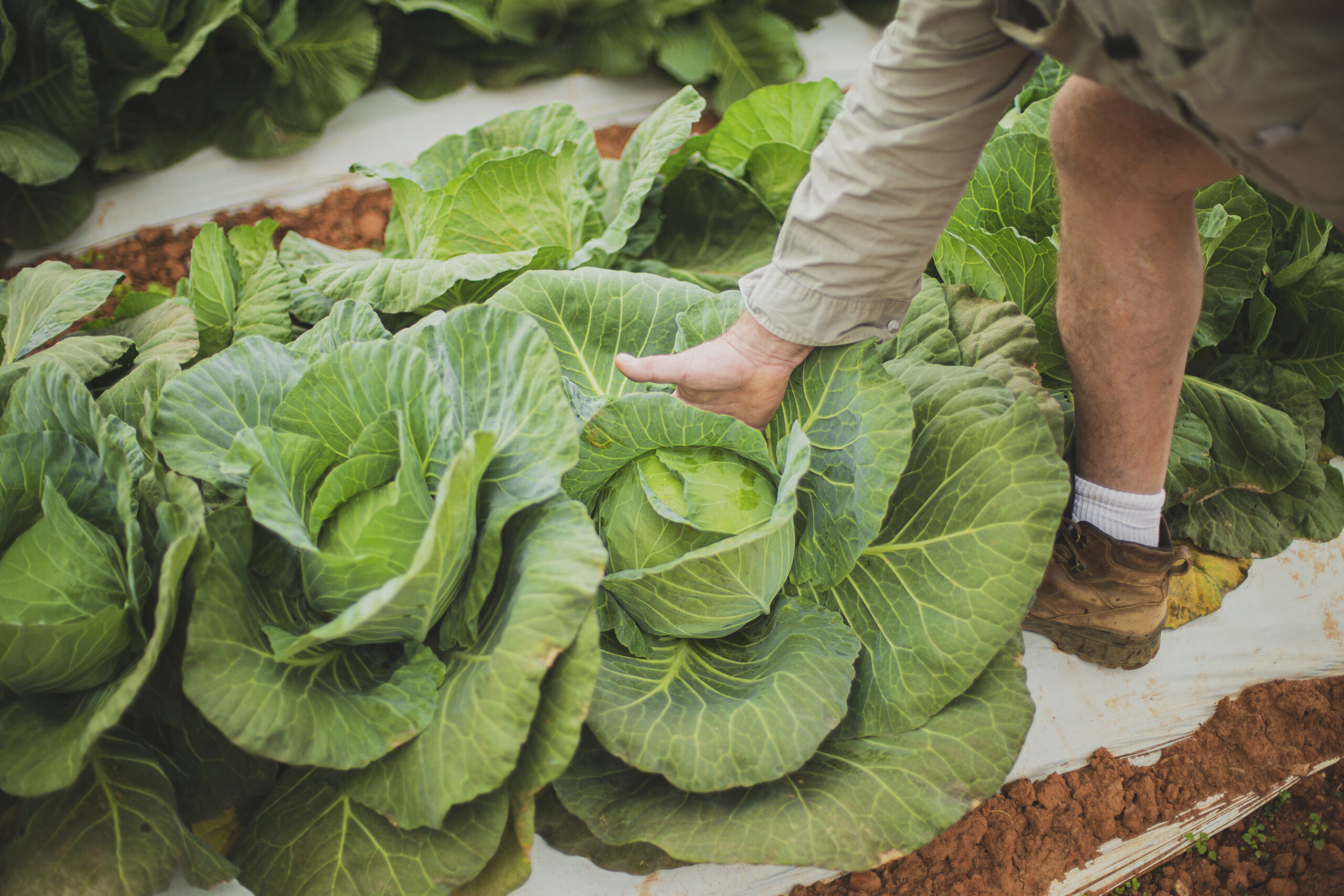 Happy Dirt: The quality of your crops is the best.

Randy: My workers take pride in their work and the farm! If something happens down at the house and my farm manager calls me, you would think somebody got hurt, but it’s like, “Oh no the chain broke on the packing line.” I’m thinking the worst when he calls because he is so [email protected]*n serious.

Happy Dirt: Talk a little bit more about the unpredictability of it all. Like you’re looking out of the window and there’s nothing you can do.

It’s like the peppers in August when it got so [email protected]*n hot. The size went down and they wanted to turn chocolate before they really sized up. Warren was worried and I told him to just wait and that everything would be fine when it cooled down. You just gotta let Mother Nature do what she’s going to do, because you’ll lose every time you try to fight it. Happy Dirt: What do you think it’s going to take for consumers to understand why they pay a higher price for quality, organic produce?

Randy: I don’t know? If everybody knew that this came from here and how many hands it went through to end up on the grocery store shelf, people would understand why.

Happy Dirt: What makes Happy Dirt a different place to work with?

Randy: I think it’s easier to work with and it’s more of a personal relationship. It’s all different people and the communication is unmatched. You can pick up the phone and talk with Alex or anyone you need to speak with at Happy Dirt.

If you want to know more about how you can support our farmers and help us build a stronger, more sustainable food system, you can connect with us via our contact form. And if you want to take a quick trip to organic farmer Randy Massey’s farm, you can take a virtual trip via our YouTube channel! When we receive the first field strawberries from our farmers, we know that the summer Ran-Lew Dairy Eggnog is the Reason for the Season

Find out why this Happy Dirt Farmer’s holiday beverage is the cream of the crop!